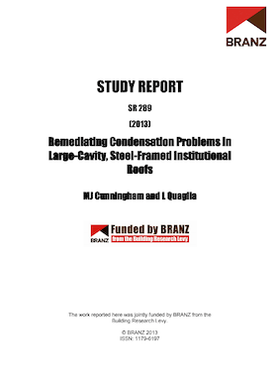 There has been an increasing number of reports of excessive condensation within the roofs of institutional buildings in New Zealand over the last few years. These roofs have a common similar design entailing large roof cavities, profiled metal roofs with underlay, metal framing, batt insulation on the ceiling and acoustic tile suspended ceilings.

Some condensation was appearing under the metal roofs, but these roofs are designed to tolerate this occurrence and so was not the problem condensation mechanism. Rather, unexpectedly, condensation controlled by a continuous underlay was collected on the metal structural elements, in particular, the roofs' metal purlins.

An understanding of this condensation mechanism and how to avoid it is the subject of this report.