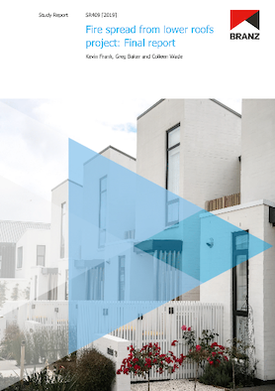 This is the final report of research into fire spread from lower roofs. This project is part of the larger BRANZ medium-density housing (MDH) research programme.

As New Zealand building densities increase, the potential for external fire spread and the impact of associated building regulations also increases. In particular, the recent push for higher-density housing results in more situations where external fire spread regulations are relevant. One such requirement is the ‘9 or 5’ fire spread from lower roofs rule in the New Zealand Building Code clause C1–6 Protection from fire Acceptable Solutions and Verification Method. The justification for this rule has not been made clear. The influence of this rule on fire risk, which requires fire protection of either the wall adjacent to a lower roof (up to 9 m vertically above the roof) or the roof (up to 5 m horizontally from the wall) is not well quantified.

This study report investigates requirements in other jurisdictions and existing research literature and provides comparisons with the current New Zealand regulations. The specific fire spread from lower roofs requirement in New Zealand does appear to be more conservative when compared to Australia, Canada, the US, the UK and Sweden. However, the general wall and roof requirements in other jurisdictions can override the specific requirements in some configurations and provide a similar or greater level of safety for this scenario. Potential heat fluxes on an adjacent external wall are estimated using flame height data and correlations and flame radiation models, and a series of reduced-scale experiments were conducted, with both categories of data compared to the prescriptive requirements.