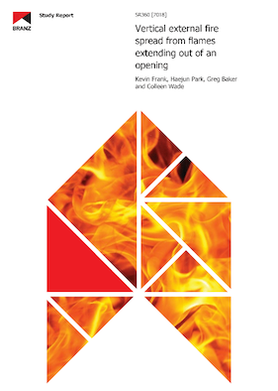 A series of reduced-scale fire experiments have been conducted to better understand the phenomena of flames projected from a single compartment opening, which can lead to vertical fire spread up a building exterior. Although there are several correlations and experimental data available to predict the projected flame heights, there exist some differences in the predicted flame heights. Correlations to estimate the heat fluxes above the opening are relatively limited.

In the current study, using heptane and wood cribs as fire fuels, the effects of variables such as opening location, fuel location, fuel type and fuel surface area on the projected flame phenomena are investigated. Correlations to calculate the projected flame heights and heat flux on the wall above the opening are developed, and recommendations are made for design practices. Relevant aspects of the C/VM2 Verification Method and New Zealand Acceptable Solutions are evaluated using the New Zealand Building Code heat flux criteria.