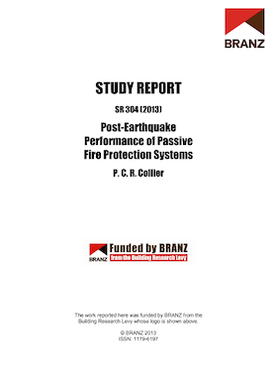 Passive fire protection (PFP) systems that are damaged by earthquakes may suffer significant reductions in fire resistance, resulting in increased risks to life safety in the event of an outbreak of post-earthquake fire and subsequent spread. In the aftermath of the Canterbury (New Zealand) earthquake events, damage to PFP systems has been surveyed in moderately damaged buildings. The degree of damage observed ranged from minimal to moderate damage, where some fire resistance remains, to extensively damaged where no protection remains.

This report focuses on damage in the low-to-moderate range where the majority of PFP systems protecting a fire compartment were largely intact, but one or two systems such as a doorset or a firewall were showing some degree of damage that compromised the protection of the whole fire compartment.