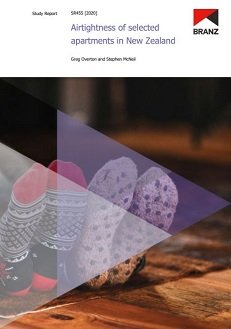 In general, the apartments were of a similar level of airtightness to what could be expected from a typical new-build stand-alone dwelling – approximately 5 ach @ 50 Pa. However, the results suggest a strong dependence on construction style. For example, for an apartment building comprising a number of concrete cells, the average result was 3.5 ach @ 50 Pa. Inter-apartment leakage appeared to be insignificant in this style of apartment but did occur in some instances, most clearly when timber partition walls were used to separate dual-key apartments.

The report also contains a general discussion around possible airtightness targets and the rationale for their potential inclusion in the Building Code. This culminates in BRANZ recommending that an airtightness level of under 3 ach @ 50 Pa becomes a target for all residential typologies in conjunction with whole-house mechanical ventilation as standard. Mandatory blower-door testing is not recommended initially, but it is signalled as being desirable in the medium-term future.